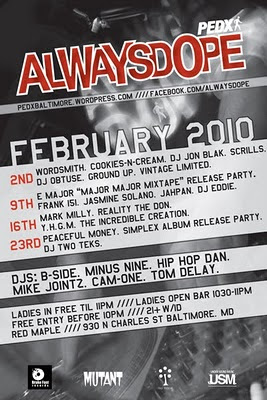 Backland - "Hopeless" (mp3)
New Backland! And he has a Block Work mixtape on the way soon. Always happy to hear new music from him and this track is pretty great.

Height is kind of at the center of the weird, exciting indie hip hop scene going on in Baltimore these days that was responsible for the Baltimore All-Rap Round Robin last summer, which was the best show I saw in 2009, and his group project Height With Friends also released the excellent album Baltimore Highlands last year. So it's not surprising that the collaborative spirit of that show and that album led to a remix album of every track from the original, with Height's vocals laid over all new beats, which was made available for streaming and downloading by AuralStates.com. Most of the people that did remixes for this also worked on the original Baltimore Highlands, including Jones, PT Burnem and King Rhythm, so it's really not too far off from the overall sound and vibe of the original, even if some individual songs get pretty dramatic facelifts. One of the things I praised the original album for in my City Paper review was that "his verses sound custom made for each track, with unique cadences that dart in and out of the beat," so it's kinda weird to hear that exact quality removed, and sometimes the new beats just plain don't fit as well, and sacrifice that comfortable, handmade quality of the songs. But it's still a really dope experiment and I hope this scene continues to bubble and get people working together in creative new ways. Height and a lot of his friends are playing Bmore Musically Informed's big show at the Ottobar This Sunday.

"Cold And Shaken (AK Remix)" (mp3)
This was the track I posed from the original album last year, and it makes sense to post the remix now both because of that, and because it's one of my favorite tracks on either record. AK from AK Slaughterr throws a pretty hard beat under the vocal, but then in the second half of the track he really chops up the vocals and takes it in a whole other direction. 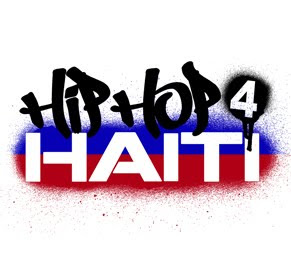 Presented By: Honey Management, Deep Freeze Ent., Caring for Others

In an effort to aid the people of Haiti who have faced a natural disaster of unprecedented proportion, an earthquake unlike anything the country has ever experienced, we present the Hip Hop 4 Haiti Food & Clothing Drive. Hip Hop 4 Haiti is a National Day on Jan 30, 2010 where each city youth & hip hop community will host an event to donate food & clothing to Haiti. This event will allow those who want to show their support and help a cause greater than them, because Hip Hop is UNIVERSAL!
This is an “all ages” event, which means bring the family! There will be live performances from some of Maryland’s well known and socially conscious artists. As well as donations, they have offered to share their talents with us to lift our spirits while the volunteers work diligently to collect and package donations for immediate shipping to HAITI.

We are asking the community to bring non-perishable food items, toiletries, baby care items and clothing with you and enjoy the entertainment. Your support is needed to help the people of Haiti and make this event a success. Please come out and join this great cause.

That’s 7 rappers, 3 Baltimore club producers, 3 venues, 3 blogs/websites, 2 labels, and a lot of other categories. Congrats to everyone that made the list, everyone else: grind harder, or actually e-mail me every time you do a show or drop new music. 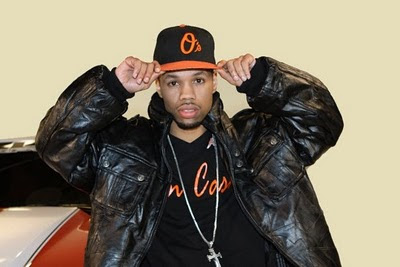 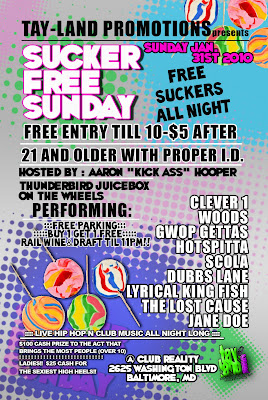 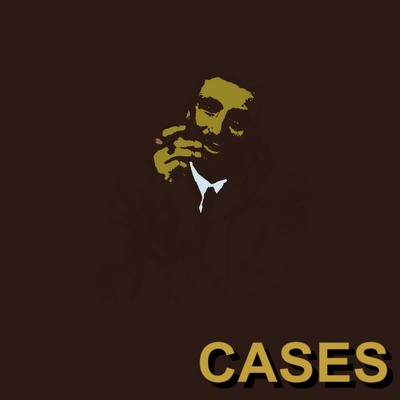 A year or two back when I interviewed A-Class for Mic Life Magazine, he mentioned one of the upcoming projects he was working on with his label, Brake Fast Records, was an album kinda built around samples from the show "Columbo." I'd kinda forgotten about that by the time I went to Brake Fast's Always Dope even a few weeks ago, and the album it was a release party for, Cases, turned out to be that album. Tom Delay is a producer, and he did most of the beats on this and I guess kinda had the vision for the whole thing, but pretty much every track has a different rapper, including A-Class, Seph Jones, Ironsoul and Dirt Platoon. It's kind of a novel idea, using something like "Columbo" as a jumping off point to do crime rap from a more dramatic, cop show noir kinda angle than the usual gangster poses, kinda leaves more room for storytelling.

A-Class - "In Case I Find" (mp3)
As many amazing performances as I've seen A-Class give at various battles, I still haven't heard a lot of studio material from him aside from his one album, so it's always good to hear some new stuff like his 2 tracks on here. 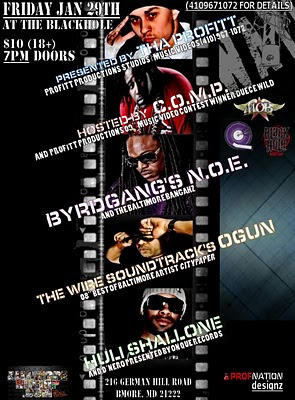 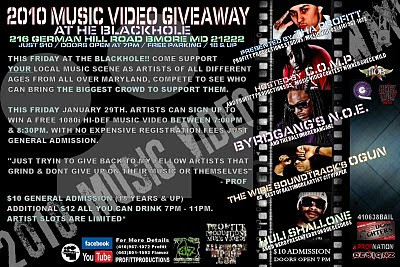 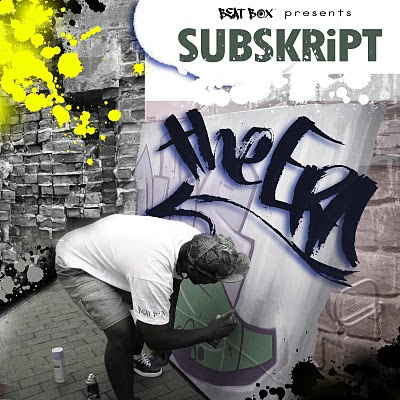 Beat Box is a rap trio that was formed a few years ago that I've heard from here and there, and appeared in the Paused In Time documentary last year. This is their debut album (although I'm not sure why it's also credited to SubSkript, if that's another name for the group or what). The impression I always got, maybe mainly from their name, is that they're kind of an old school throwback group, and though they've definitely got some conscious lyrics and some old school flows, I was surprised to hear just how contemporary the production sounds, a lot of these beats could be on the radio, all the synths and claps. I don't love the record, it's a little bland to me and the rapping isn't real impressive, but I like the interesting combination of different aesthetics that are kind of colliding here. You can buy The Era on CD Baby.

Beat Box presents SubSkript - "Coast 2 Coast" (mp3)
I really dig this beat, interesting combination of acoustic textures in the beat that makes it really stand out in the context of the album, which is overall more synth-driven. 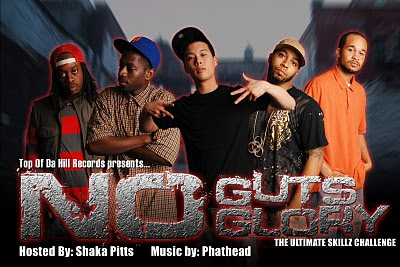 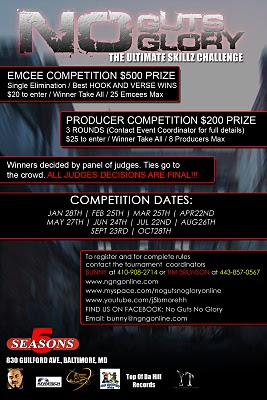 Over on my other blog, Narrowcast, I recently posted a list of the 20 best shows I saw in 2009, and the Baltimore hip hop artists on the list included Height, Mickey Free, AK Slaughter, Rapdragons, P.T. Burnem, Kane and Midas and Ron G. of Mania Music Group, Minlus McCracken, Jade Fox, Wordsmith, Soul Cannon, Si-Notes, Shy Lady Heroin, the Get Em Mamis and E Major. Allbmorehiphop.com and DJ Jabril released the first mixtape in the Block Work series, with Barnes, a few months ago, and now the second volume is the third release from the supergroup Gritty Gang, who previously released mixtapes in 2006 and 2009. Ogun, as usual, is kind of the ringleader, and his DJ Excel-produced single "Ever Since I Saw You" is on here, but in general the focus is on expanding the Gritty Gang family, with some artists that were involved from the very beginning (Skarr Akbar, Rockwell, XO), some that first appeared on last year's mixtape (Sonny Reddz, Kuan, Talal, Barz), and some more that are new to the fold with this release (Blue, Maintain, Rico Hopes and others). I can't say I love every track on here, and some of the newer artists I don't really have a feel for yet or have much of an opinion on, but I like where they're going with this, kinda building two franchises at once with this tape. You can download it at allbmorehiphop.com/grittygang.

Q Gutta & Si-Notes - "Never" (mp3)
Big thanks to DJ Jabril for shouting out my name and plugging Gov't Names at the beginning of this track, which conveniently also happens to be one of my favorite songs on the mixtape. 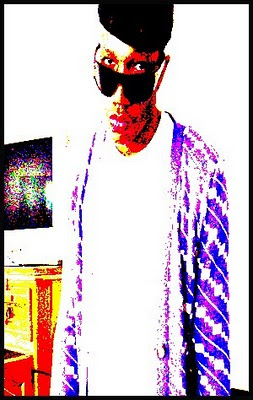 Don Demenace - "Go Tango" (mp3)
Don Demenace is a young guy, I think about 18 years old, that's been e-mailing me and sending me tracks for about 2-3 years now, previously under his old name, Lil' Don. I'd never gotten around to posting any of them in the past, mainly because individual tracks tend to slip through the cracks with me unless they really knock me out right away, I only really make posting about full-length releases a top priority and he's never sent me any. But I've definitely been impressed with the content of his records for someone his age, a lot of his songs are pretty serious statement records or have some kind of high concept theme, like he had one comparing the commercialization of rap to the commercialization of Christmas, and this one is about someone losing their virginity to an escort and using the dancefloor as a metaphor to talk about that. It's apparently from a record with the awesome title Rap Sucks, Keep Snitchin'. 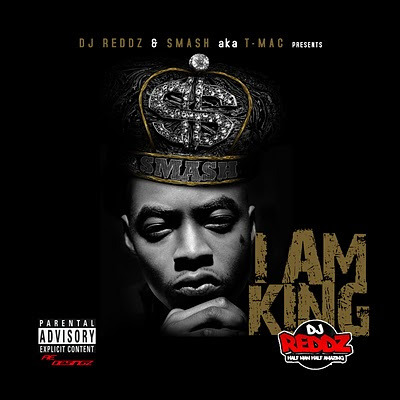 Smash is probably Baltimore hip hop's biggest overnight success story of the past couple years, at least in the sense that I'd never even heard of the guy before 2008, and then kinda out of nowhere he had multiple songs on 92Q and the D.C. stations and was being treated like kind of a big deal. I haven't been especially kind to the guy's music in the past -- I called out his big breakthrough hit, "Too Much For Me," for beatjacking Lil Jon, and referred to his AutoTuned vocals on the more recent single, "Getting Money," as "pixelated vomit." But I don't really have anything against the guy, at the very least he has a distinctive voice, which I always think is a big big plus for a rapper, but I feel like anything local that gets radio play should be held to a higher standard, to put the scene's best foot forward, and when someone kinda comes outta nowhere with just okay music getting that kind of exposure, I scratch my head and maybe resent the whole thing a little bit. And I have to say, I kinda get him as an artist and like his music now that I've heard a full length project from him, even if I hate the title (seriously, can we declare a moratorium on the "king" shit in this town?), some good songs on here, including a couple collabs with TestMe. You can download it at allbmorehiphop.com/smash.php

I wrote a City Paper feature about the Rapdragons a couple months ago, but it occurred to me that I hadn't really posted about their album yet. I kinda talked about the album already in the article, but I think it's pretty fun, kind of takes the amateurish lo-fi feel of the whole Height/Round Robin rap scene they're affiliated with but combines it with an ignorant boastful rapping about blunts and bitches kinda mindset, which in a weird way is a fresh combination. You can download the album, and preview tracks from their next one, Featuring Baltimore, at the Ltd Comp site.

Rapdragons - "Bigwams" (mp3)
This track samples Bob Dylan's "Wigwam" and is one of the faster, funnier, and more weed-focused cuts on the album. 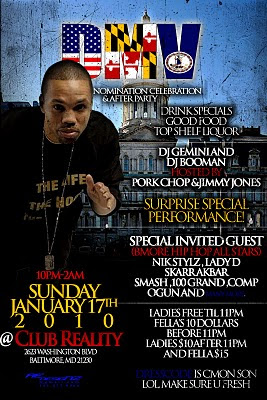 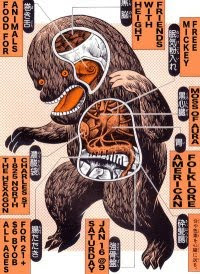