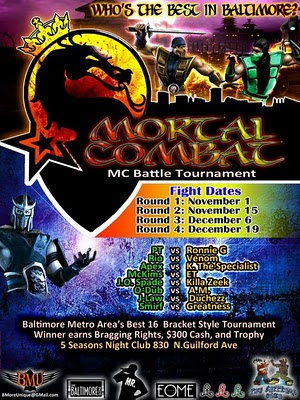 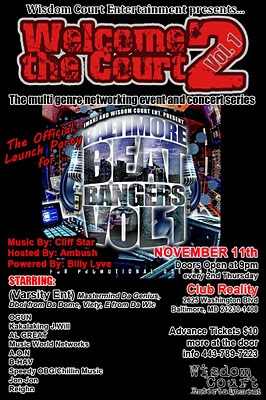 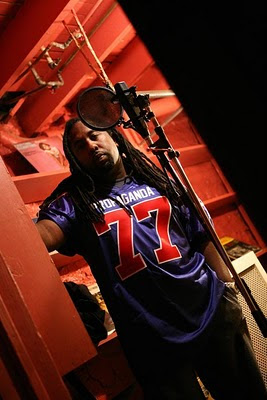 Kes - "Love Letter To The West" (mp3)
Recently I posted a video directed by this cat Keston De Coteau, and as it turns out he also raps himself, under the name Kes. He sent me some tracks in these really kind of bizarre, borderline unreadable e-mails where he'd say things like "I am quietly old school if I want to believe it or not but all artist believe the work is alway relevant. I been called lyrical and that's not a famous as it use to be." And I was like damn I wonder if this guy's raps will be this strange, and the aren't really, but he definitely has a unique voice and perspective. This song is my favorite of the ones I've heard, dope beat and it's cool to hear an east coast rapper paying tribute to the west coast. 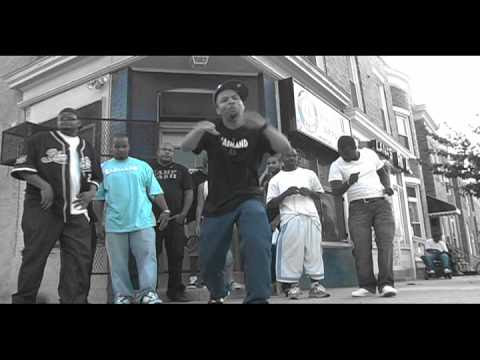 Mullyman - "Black And Purple (wiRemix)" (mp3)
It's funny, I was just griping to some friends recently that I don't really understand the hype about Wiz Khalifa and that I don't like his single "Black And Yellow," and then Mully took the beat and did something with it that I enjoy a little more, and flipped it from a Steelers anthem to a Ravens anthem. 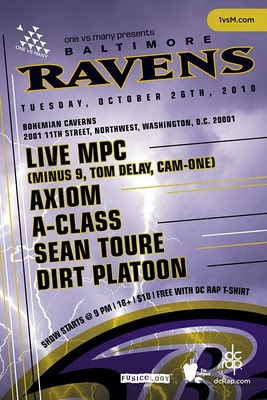 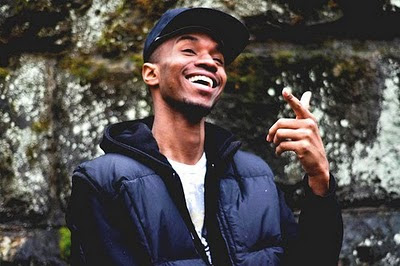 Rickie Jacobs f/ Supe and Rome - “Fryday” (mp3)
Rickie just dropped his full-lengthAir Jacobs last month, but here’s a new song not on that LP, produced by Trey Michaels and featuring a couple guests, including Supe from the Love Meds. I started working with Urbanite Magazine a little earlier this year, and this week I guest edited the Tuesday arts/culture edition of the daily zine that Urbanite e-mails out now. Some of the stuff I put together for the zine that went out today includes:

- A feature on Mickey Free, the rapper whose new album Last of the Tight Wiggers I posted about on Gov’t Names a while back.

- A Q&A with Brett Yale and Jimmy MacMillan of Friends Records on how to put out music on vinyl and cassette.

- A review of the new solo album by Dustin Wong of Ponytail, Infinite Love.

- A review of Josh Sisk’s new book, Under The Strobe Light - Club Photos: 2005-2009, which features a lot of great pictures of Baltimore artists like Rod Lee, K-Swift, Say Wut, the Get Em Mamis, Blaqstarr, Scottie B., Mullyman, Rye Rye and others.

- And a bunch of links to Baltimore music websites (AllBmoreHipHop, BeatBots, the Ms. Tris Music blog) and listings for cool events happening this week, including Cullen Stalin and Scottie B. at Metro Gallery, Hip Hop In Pink w/ Keys, the Get Em Mamis, Si-Notes and Golden Seal, and Greg Dulli and Craig Wedren at the Ottobar. You can sign up at the Urbanite site to get any of the weekly zines e-mailed to you in the future.

# posted by Al : 4:59 PM  2 comments
Things are going to start moving a little slower around here on Gov't Names, which isn't necessarily something that's worthy of a post or a big announcement, but I just wanted to make a quick note of it. For 5 of the last 6 years that this site has been going, I've been pretty driven about putting about new posts pretty much every single day, with occasional hiatuses during the holidays or when I was traveling or dealing with a major life event like going on my honeymoon or having a baby. But in the year since I had my son it's definitely been harder to keep up with the grind, and as much as I love the site, I make no direct income from it and when I don't have a lot of free time it starts taking my attention away from more important work. At the same time, I love this site and what I've built over the years, and I appreciate that there are people that check this page every day and I like them being able to count on something new to see or hear here every time they stop by, and I always hate seeing good blogs die a slow death as posts get less and less frequent. So I plan on continuing things much as they've always been here, but there just might be more time between posts, or I might emphasize quality over quantity. I used to try to cover every piece of music I was sent, but I get so much now that that's pretty much impossible, and I never want Gov't Names to be one of those zombie blogs that just posts music without listening to it or offering any kind of commentary or critique ever. It's also been frustrating that people have gotten more demanding about having their stuff posted right away, and sending incessant follow-up e-mails that just make me want to delete their shit and not post at all. And people used to e-mail me event flyers I could post, now they just tag my name on Facebook on graphics that are too small to read the info and therefore not worth posting here, which means I haven't been able to keep up with event announcements like I used to. But I'm ranting, the point is posts probably won't be daily anymore, but hopefully Gov't Names still has a lot of life left in it.

I posted a couple songs by this can John Regan recently, including the second single from this album, which just came out. The list of names of guests and producers on here is pretty impressive for an indie artist (Marsha Ambrosius, Joell Ortiz, Skyzoo, Nottz, Needlz, 88-Keys), but as I've kinda said before, this isn't really in my wheelhouse of rap I like to listen to, it's all kinda earnest and bland, like you can tell he's a nice guy and he's really serious about this hip hop thing but there's not a lot of super memorable lines or hooks to keep me coming back to. See the Culture VI site for more info. 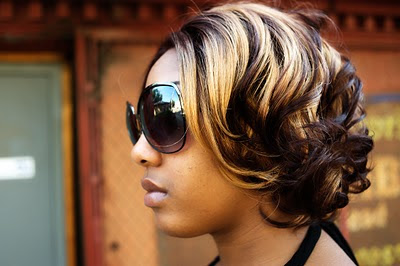 As you are aware October is Breast Cancer Awareness Month and I like many others have lost someone to cancer. It might not have been breast cancer but cancer is cancer and the effects affect us all the same. A friend of mine has been diagnose with Breast cancer and we were having a conversation about the lack of community involvement from those in the Hip Hop industry especially when it comes to women issues. That conversation sparked something in me to remain involve in exposing, solving the community ills by using Hip Hop as a vehicle to carry those messages. That conversation helped to bring forth “Hip Hop in Pink” the Breast Cancer Awareness and Prevention showcase.

Hip Hop in Pink will feature musical performances by:
Keys, Get Em Mamis , Si-Notes, Golden Seal, Igima, Jacquie Brown Selahchick, Ashley Moore, and The Mighty Paradox.
Motivational speaking by Stephanie Mecca Franklin Ceo of of Mecca Place.org and other guest speakers who will discuss the importance of breast health and early detection.

Portion of the Proceeds from the Hip Hop in Pink will go to the non profit organization, Heal a Woman to Heal a Nation, Inc. HWHN

This is your time to stand with us and be a part of something great for the community!

For More info http://merdj.com/blog/hip-hop-in-pink/
Hope to See you there!!!!! 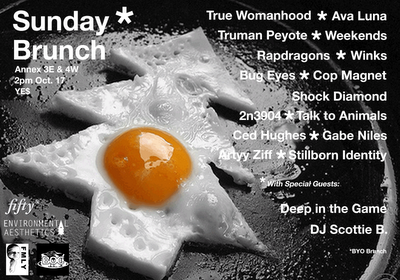 I always thought Dirt Platoon was one of the more slept on groups in Baltimore and they had a lot of potential, but I didn't really know they were working on something big with Brake Fast Records until I got their video for Deeper Than Dirt's first single, "Pennsylvania Ave," which was really impressive and got a little bit of buzz up for the album. And I'm happy to say the whole album is that good, I almost wanna say they're on some '90s Wu Tang shit but I don't want to paint them as retro or regressive, they're really clearly just doing them and this album just sounds like Baltimore, in the best way. Buy the album for only $7 on Band Camp. 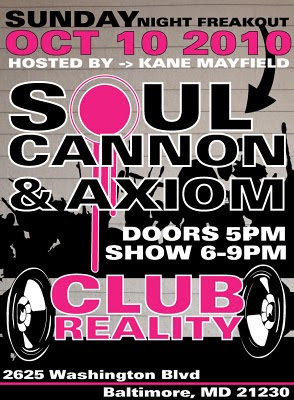 Smash shot a pretty nice-looking video for his “Hard In Da Paint” freestyle, which seems like a waste but hey, it's not my money.

Los f/ Dappa!!! Dan Midas - "Take Off" (mp3)
Here's a leak from the Shooter mixtape Los is dropping later this month, the first new track he's dropped since we at the City Paper named him Best Male MC in the city last week. And it features Midas from fellow Best of Baltimore alumni Mania Music Group, really cool to see these guys working together, didn't see this collab coming at all but it really works.

If you're an MC, Poet, Producer, DJ, Promoter, Manager, Club Venue Owner, Performer (of any type), Videographer, Photograher ..or if you do ANY thing in the scene.. Please Vote..
Send this form to thebaltimorescene@gmail.com (anyone.. feel free to repost form)

Hip Hop Artist of The Year:

Battle MC of the Year

Poet of the Year

Vocalist of the Year

Band of The Year

Graphic Designer of The Year

DJ of the Year

Studio of the Year

Producer of the Year

Photographer of the Year

Videographer of the Year

Manager of the Year

Promoter of the Year

Under the Radar Award

*Golden Awards are awarded to Artists who ALSO make other contributions to the scene by providing services, outlets, resources, community service (Any Thing That Enhances The Scene)