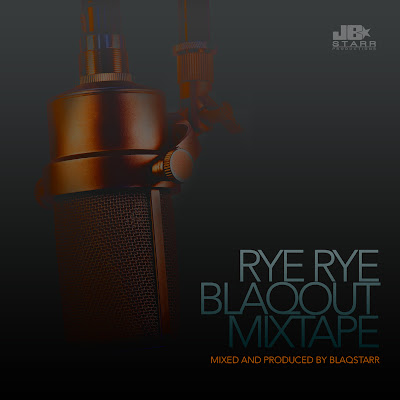 It's been weird to watch the last couple years, as Rye Rye has become kind of a big deal, because I wish everyone here success and don't want to come off like a hater, but I've been kind of mystified by how fast it's happened. I always thought Blaq Starr had huge potential to blow up somehow, but ever since she appeared on his "Shake It To The Ground" (a song I've never been shy about disliking), she's been getting all this media coverage and signing with and doing a video with M.I.A. and is kind of Baltimore's new ambassador to the whole hipster scene. I don't think anyone really thinks she's a great rapper, although a couple times she's kicked verses that I thought showed some potential, but it'll be interesting to see what her album's like when it drops. Technically, this is a Rye Rye mixtape mixed and produced by Blaq Starr, but really, it's more or less a Blaq Starr record featuring Rye Rye here and there. A lot of his club tracks are on here, and though she of course did the hook for "Hands Up, Thumbs Down," there's a lot of other tracks Rye Rye isn't even on, like "Feel It In The Air" and "Crazy Leg Wit It," and it's only 33 minutes, so it feels kinda padded, like they're saving all her unreleased stuff for the LP. But again, Blaq Starr's a genius so I'm cool with that, lotta great beats on here. Blaqout Mixtape is available for download on ALLBMOREHIPHOP.com.