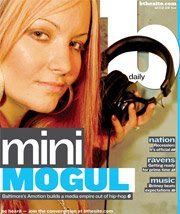 - Amotion and Deep Flow Studios landed on the cover of B with a feature by Timothy Cooper earlier this week.

- Say Wut is featured in the current issue of XLR8R with an article by Michael Byrne.

- NOE is featured on a new song from the Jim Jones record called "Swagga From Us" with Lil Wayne and Twista. NOE is talented and he did his thing on that Byrd Gang album, but if he's gonna let Dirty Angel Jimmy keep using him on songs that are mainly about dissing or one-upping Jay-Z, honestly dude is gonna stay losing.

- In other Bmore-cats-getting-shine-on-some-Dipset-bullshit news, producer Street Heat did a beat for their new Bad Santa mixtape.

- If you've heard Lil Wayne's Dedication 3, DJ Drama gives a quick "rest in peace" shout out to DJ K-Swift on track 11, "She's A Ryder," so big respect to him for that.

- I should also say thanks to PenDragon for putting me up on those last 2 items, and mention that he's been really putting his music out there online lately and getting featured on sites like On Smash, illRoots and Limited Hype.

- EDIT@2pm: I forgot to include this when I first put the post up, but the Grammy nominations were announced last night, and a song I posted here a few weeks ago, "Never Give You Up" by Raphael Saadiq with Stevie Wonder and Baltimore singer CJ Hilton, was nominated for Best R&B Performance By A Duo Or Group With Vocals. Congrats to him, it's a great song and really deserves it, I hope he gets to perform it at the Lyric next week when Saadiq opens for John Legend. On a side note, CJ's sister told me she'd help me get in touch with him for an interview, but she hasn't responded to my e-mails lately so I'm still trying to reach him if anyone can help.

Jeeze, they'd had that Say Wut article for so long I'd nearly forgotten about it.

Congrats But this statement "God willing, if Amotion could get as much control of the city as the mayor, this city and its music would be a million times better.” Is way off her grind is great but music wise nah i cant see it at all but there is a person I would give that honor to its not amotion though sorry no hate at all keep doing your thing.

This week has been a very eventful one for Darkroom Productions. Hamsterdam Vol. 2 topped both my list of Baltimore albums of 2007 on Noise and Sam Sessa's list on Midnight Sun. And a couple days ago, Juan Donovan sent out an announcement that they'd signed a deal with Koch Records for a nationally distributed album in 2008. Here's an excerpt of that e-mail:

I would also like to announce that my company Darkroom Productions and our label Darkroom Enterprises has just signed a joint venture with the #1 urban label in music right now, Koch Entertainment. For the past 2 years, our company has made strides as producers doing songs for Grammy winners such as R Kelly and Chamillionaire, also securing major deals with HBO, MTV, and 20th Century Fox, while still creating a worldwide buzz with our projects "Hamsterdam - The Best of Baltimore" and "Hamsterdam 2 - Stash to the Strip". And all of the hard work has paid off as we have been meeting with major labels since November of '06 for a home for our label Darkroom Enterprises.

But in the quest of securing the best deal possible, it has taken us over a year, and we now couldn't be happier. Our first project will be an album with the feel and importance of Hamsterdam. Showcasing some of Bmore's hottest talent to the world. We still aren't sure about the title yet (tentatively its "Hamsterdam - The Album"), but we have already secured our street date which is April 1st . (and yes, this is a REAL street date, your boyz are definitely coming out) So in the meantime, stay tuned for some of the hottest new songs and videos from some of Bmore's finest as new singles will begin dropping in January. We are looking to release at least 5 to 6 singles for the album. This project is going to be a serious problem, trust me.

And be sure to pick up next month's VIBE magazine. Darkroom will be featured in it. I believe Keysha Cole is on this month's cover but unfortunately I don't know who will be gracing next month's cover yet, but be on the lookout for it.b


Mr.Shipley can you get us an update on this? I think they need to reach out to some of this new talent out or its going to sound dated.

reality reality - I don't know what the latest is on the Darkroom project, I know it got pushed back a couple times. I could ask them what's up if you really want, but Darkroom tends to send out big announcements when they have something going on, so I usually just wait to hear from them. It's not my place to tell them what artists they need to work with or whether their material is "dated," though.

Jamal from Darkroom's blog is here if you wanna get in touch with him:
http://anymartinluther.blogspot.com/

Okay,That comment was just my opinion your right it isn't your place to do that.