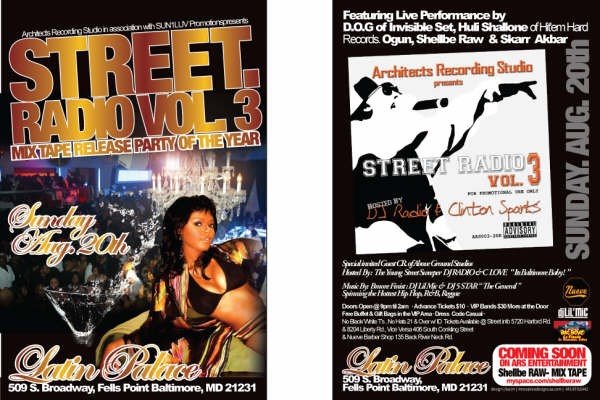 As you can see from the flyer above, the release party for this mixtape is this Sunday, looks like a hot bill. I'm mad that I won't be able to be there, since I just realized I'm gonna be out of town that night, and it would be nice to be able to check out a show that's only a few blocks from my apartment. Jason Torres wrote a City Paper article about ARS about a year ago when the first Street Radio mixtape dropped, and since then they've kept at it with 3 more volumes, moving thousands of units of each. The new one is pretty good, although I don't know if I like it as much as volumes 2 and 2.5, at least in terms of song selection. There's some good joints on here that I was already familiar with, Bossman's "You're Wrong," D.O.G.'s "Big Bizness," ShellBe RAW's "Give It To Me Raw," UnReal's "No Problems." And there's some really good new shit from Backland and Little Clayway and C.R. too. This is the 3rd DJ Radio mixtape I've posted about here in just the past week, so you can tell dude is really killing shit around here right now. But one thing I have to admit I'm not really feelin' on these Street Radio mixtapes is how they'll slip in a handful of national records in with all the Baltimore stuff. I mean, if they're gonna do a Bmore mixtape, they should go all the way and not throw in some random Jae Millz or Rick Ross records I can hear on any other Streetsweepers mixtape. It was cool that they got Clinton Sparks to co-host this edition, though, since his profile is real high on the national mixtape circuit these days.

Blesst - "Talk Radio" (mp3)
The Boy Blesst has been on a lot of local mixtapes, and I like this track in particular, good concept and execution, nice flow. His song "B City" on C Love's mixtape was good too.

Tony Kurtis f/ Bossman - "Hooptie" (mp3)
Tony Kurtis aka Juteboxx is a local R&B singer and Bossman dropped a couple nice verses on his song. Bmore's got some good R&B coming out these days, Paula Campbell and Scola and C.R. Bossman's album is dropping at the top of '07 now, and he's got a lot of new music coming out these days, including a new freestyle on HipHopGame.com (thanks to Joe for the link).

Yo Big up to D.O.G opening doors for Bmore- Kenneth

I heard that free style from Bossman that joint is fire. Also some cats where hating on his song mostly from DC/PG and of course hating ass New York bum ass lames. While one cat think Bmore is the south not truely it's Noreastern to me. But anyway most, cats where feeling it!!! Kenneth

Thanks for taking the time to review the item Al.

Sorry you can't make it to the party, I'm sure C-Love will have a thorough review though!