I put a post on the Baltimore City Paper's Noise blog about Kane Mayfield's Rhymes By Kane: Thievery Corporation Edition.

In this week's City Paper I wrote a feature about DJ Jonny Blaze and his fusion of Baltimore club music and gospel on the new album The Transition.

Also in this week's paper, as usual, I wrote the Short List of concert listings.

I wrote a City Paper Noise blog post about the new Height With Friends video for “I Can’t Stand To Be Refused." 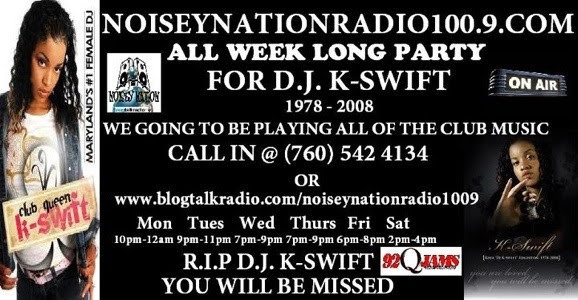 This week marks the 4th anniversary of DJ K-Swift's passing, and I wrote a City Paper Noise blog post about that and Noisey Nation's internet radio tribute to her.

The Baltimore City Paper's annual Big Music Issue is out this week, and in addition to the many articles, it features the introduction of several new genre-specific columns of music news that will be regularly running in CP from now on. I am writing two of them: Rap Sheet, which is about hip-hop, and BPM, which is about dance and club music and DJ culture.

Also, as usual, I did this week's Short List of concert listing.

The CW's upcoming musical talent search show, "The Next: Fame Is At Your Doorstep," is shooting in Baltimore this week, and I wrote a quick Noise post with info about the taping, how to get tickets, and a meet-and-greet with one of the celebrity mentors on the show, Nelly.

This week I wrote a post on the City Paper's Noise blog about three Baltimore acts that were nominated to compete in a battle of the bands to get to play the 2012 Afro-Punk Festival: Femi The DriFish & The Out Of Water eXperience, Me & This Army and Reina Williams. Voting just closed today and Femi The DriFish was voted into the top 16 to compete in the battle. Congrats to him!

I wrote an entry on the Baltimore City Paper's Noise blog about Rebel Yell, the solo album from Stevie Krizz of The Unstoppable Nuklehidz.

Urbanite Magazine's hip hop issue is out, and I interviewed Rye Rye and Blaqstarr for the cover story. I also wrote a brief overview of the checkered history of Baltimore rap and club music artists that have had national attention and/or major label deals in the past.