I wrote about Tonio: From Da Top's single "Suicide" on the City Paper's Noise blog. 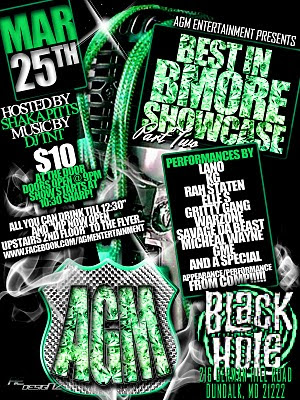 I wrote a post on the City Paper Noise blog about "Crystal Meth," the new video by Born King aka Killa Fifth, produced by Singodsuperior.

This is an EP that came out last month featuring two artists from Under Sound Music paying tribute to J Dilla by rapping over a few of his beats. I know it's kind of sacrilege to not totally worship Dilla these days but he was always just a good producer among many to me, nothing more, nothing less, so I like the way this is kind of a small, straightforward project with guys just grabbing beats they like and flowing over them. You can download it on the Under Sound band camp page.

E Major and Sean Armstrong - "Aquarius" (mp3)
Good choice of a beat here that was originally used on a Common track.

Here's the video for "Velvet Limousine" by DDm, which is short for Dappa-Dirty Money or Diddy-Dan Midas or something, off his upcoming album American Graffiti.

This morning WYPR aired their latest segment featuring me talking about Baltimore club music along with DJ Equalizer, and you can stream the entire segment, plus some web exclusives, on the Maryland Morning site.

I wrote about Rome Cee signing to Under Sound Music and releasing his new track "Rap Messiah Freestyle" on the City Paper's Noise blog. 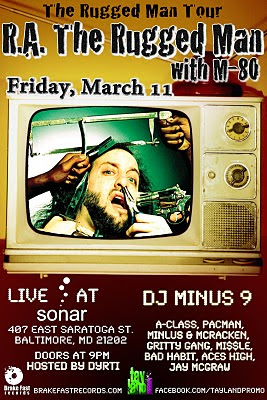 Last year I began doing some segments with the Maryland Morning program on WYPR, Baltimore's NPR station, including some pieces about Baltimore club music to tie in with my upcoming book, Tough Breaks: The Story Of Baltimore Club Music. The latest segment in that series features DJ Equalizer, and will air on the morning of next Tuesday, March 15th, and the interview turned out great and I think will be really entertaining and illuminating for people who don't know about early Baltimore club and the role Equalizer played in it. It should stream on the Maryland Morning site at some point, too, so I'll try and link that when it goes up if you can't listen to the show when it airs.

I posted Billo's new video "Off My Mind" and wrote a bit about it on the City Paper's Noise blog.

I wrote a post on the Noise blog about "Hometown," the great new Dukeyman-produced single by OOH from Brown F.I.S.H., from his upcoming solo EP The Big 7.

The March issue of Urbanite Magazine hit Baltimore newsstands today, and the theme of the issue is change, with features on six Baltimore 'change makers.' One of them is my article about Shodekeh, the human beatbox who's been performing with the BSO and doing countless other interesting projects that change the perception and parameters of his artform. I also spoke to another beatboxer, The Bow-Legged Gorilla, and High Zero Foundation member Shelly Blake-Plock about Shodekeh for the article.

In the same issue, I also wrote a review of Celebration's new album, Hello Paradise.