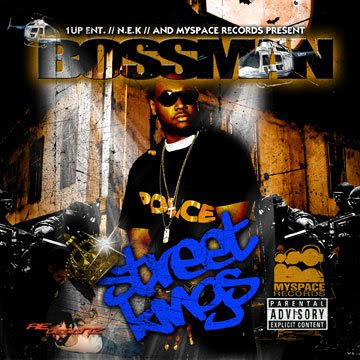 A few weeks ago, Bossman released 2 new mixtapes through his MySpace page, I thought it was odd at first, because he's released double CDs before, but not 2 separate mixtapes at the same time. Then I listened to them, and realized where they were separate -- the first one, ATM: After These Messages, is more a general mixtape of new music, featuring "Break Me Off" and material in that vein, but Street Kings is on a whole other vibe. It's pretty much a concept album about law enforcement, all stemming from an incident in March 2008 in which he was arrested but not charged, and says he was a victim of police brutality is apparently involved in a lawsuit against the Baltimore PD. Considering all the constant complaints and controversies about how Baltimore police officers treat people in the city, I think it's good that an artist as prominent as Bossman is kind of standing up and addressing it in his music, even if it kinda feels like he's more mad about the one thing that happened to him than really taking a political stance. The anger definitely comes across, though, I mean it's a 63-minute mixtape just about this one topic. The first song he had out with AutoTune on it, "Ghetto" featuring Scola, even sounds pretty aggressive in this context, and I never really heard it that way when it hit radio last year. I would say for people like me who are Bossman fans but aren't real into "Break Me Off," this would be a better mixtape to check out than A.T.M..

Bossman f/ D.O. and Tone - "Catch Me If You Can" (mp3)
That's how Dollars and Tony Manson are credited on these mixtapes, I guess that's the names they're going under now. Anyway this track is one of my favorites, great beat.