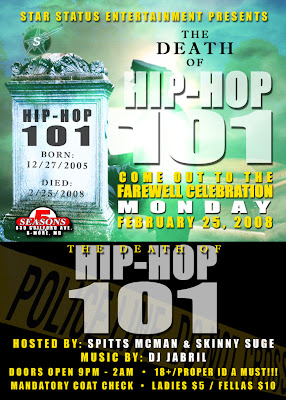 Say it ain't so, Sonny! At C Love's town hall meeting just a couple weeks ago, someone made the excellent point that, as much as Hip Hop 101 is old news to people in the scene, and people might take it for granted, we'd all miss it if it went away. And sadly, we're about to find that out first hand, since this Monday will apparently be the last Hip Hop 101. I always thought it was a great event, I made sure it got best weekly event in the City Paper's '06 Best Of Baltimore issue, and covered probably five or six Hip Hop 101 shows on Noise in the past year. But as great as it was to have that weekly showcase to accomodate all the artists in the city that need to get out there and perform, I'm sure it was hard to get a good turnout every week. Maybe now someone can get something big and monthly going on again that can feel like a real event every time, I don't know, but not having this kind of showcase will be a big loss to the scene. 5 Seasons is going to keep having shows as far as I know, and Sonny says he'll still have Monday night there with no performances, but this might be a good opportunity for him or someone to try and start something new with a clean slate. Anyway, here's Sonny's full announcement:

THIS MONDAY THE RIP PARTY FOR HIPHOP 101
BUT PEOPLE WILL 4EVER LOOSE SHIT GOOD IN THERE LIFE IF THEY DONT REALISE WHAT THEY HAVE! WATCH WHATS GONNA HAPPEN AT THESE VENUES NOW.. ONE THING I LEARNED IS THE PEOLE WHO SAY THEY REALLY LOVE YOU REALLY DONT LOVE YOU. THEY ONLY TRYING TO GET WHERE YOU AT OR THEY TRYING TO PICK YOUR BRAIN FOR INFORMATION BECAUSE THEY DON'T KNOW SHIT..LOL.. THIS SHIT IS CRAZY.. I WILL ALWAYS MAKE MONEY IN WHATEVER I DO!!!! come out and support next Monday.. NOBODY should be mad!! obviously this is what The artist wanted shit if they didnt want this to happen they would've supported more!

For everyone that did support from day 1 to now I want to thank you for your support. BUT i am sad to inform you all that from the 20-30 people that continued to come thru every week, it just was'nt enough.. HIPHOP 101 on Mondays at the 5 seasons is DEAD! The lack of support from the artist, ego trips and pettiness, and pretty much no people pretty much put this in the ground! It sucks because we ran this for 3 years with only 2 incidents there.. I won awards there, watch people row into local celebritys in there for this to happen! i hate when money get thrown in the equation but i or my partner Mr Wilson just cant afford to not only pay the club at the end of the night.. but pay everyone involved WHEN THERE IS ONLY 10 PEOPLE OR 20 PEOPLE IN THE CLUB SUPPORTING.. I feel as though Shaka Pitts, and DJ jabril... along with the special guest such as Squirral Wyde and G Major and not 4getting Me'aze Millioni deserved waaaay more then what we gave them for all the hard work and dedication they put to make HIPHOP 101 a place for not only us.. but EVERY artist in this city. I even went without getting paid for 2 months just so the club and my people can walk out of there with at least enough money to put in there gas tank. I know people will say awww it was'nt promoted right and shit BUT thats not the case, People in this artistic community and not just here in Baltimore but everywhere want shit and not bring anything to the table. People always talk that support shit but do they really support? NO! Hip Hop 101 was a GREAT brainchild but maybe when people start understanding how this music business works they will soon understand what we was doing here for the artist. Come on we brought you a AWARD SHOW that i will continue to do EVERY YEAR.. Ok Ok Ok i didnt do it right last year.. but i did it in 3 weeks (whatdoyawantfromme) and I got the BUSINESS from folks that REALLY thought they was getting it in crazy but was'nt. So when i book them for a show down there at the club, they don't bring NOBODY! usually when you are killing in the street your FANS come to support.. Well it did'nt happen that way. But it never very rarely happens.. People see that the club is packed so they immediatly thinking YOU are caking off BUT man after you finish paying the club and EVERYBODY involved you suppose to make a good share of money BUT you don't! Those days of having 30 people in the club or when it was'nt hardly anybody? well we have to come out of pocket for that.. So we decided to DEAD that shit...

On a lighter note though I will continue to keep MONDAY NIGHT at the 5 seasons.. there just wont be NO PERFORMANCES! I will continue with the BLAMMY AWARDS as well as THE FRESH FEST! I will have performances BUT the performances will be NATIONAL ACTS ONLY with maybe 1 local act opening up. I will have events for local artist such as battles, and shows but at a different much bigger venue. This monday at HIPHOP 101 will be the last show.. I am doing ANOTHER SHOW BUT it is going to be the FAREWELL PARTY! AT THE END OF THE NIGHT THE MICS WILL BE OPENED UP FOR THE EMCEES IN THE BUILDING TO GET IT IN ONE LAST TIME!!!! THIS MONDAY IS GONNA BE CRAZY!!!! DO NOT MISS THIS PARTY.. CAUSE THE MONDAY AFTER NEXT IS GONNA BE THE NEW SHIT ON A MONDAY NIGHT....