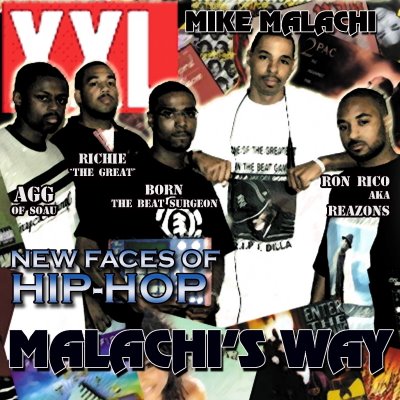 Mike Malachi is an MC who sent me an advance copy of his album last month, and I think it's just now about to come out officially. The first thing I noticed in the liner notes was that most of the tracks were produced by DJ Ron Rico aka Reazons, who I know mainly for his Baltimore club tracks. But the tracks were really on some classic hip hop shit with soul samples and all that. And Malachi has a nice slick, basic flow, just real conversational and clear, but he keeps coming with this rush of words. I met up with them in Ron's studio recently, they're good dudes. Malachi's cousin is another Baltimore rapper I wrote about a while back, Billo. And Ron is actually gonna do a remix album, God's Stepson-style, called Ron Rico's Way with all new beats.

Mike Malachi - "Intro: New Beginnings" (mp3)
Even though this is just a minute long, it might be my favorite track. That beat and the sample are just so ill, I would almost say he wasted it by only doing one quick verse but it does a good job of kicking off the album.

Mike Malachi - "Guardian Angel" (mp3)
This is one of the slower, more introspective tracks, but I like that it has a sample from Heather Headley's "In My Mind," one of my favorite recent R&B joints.

chill...I just talked to him today and was telling him that it'll probably be in the next couple weeks. I cover a lot of stuff so some things take a while to get around to.