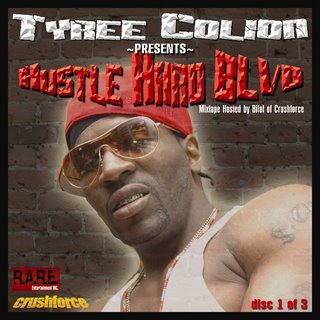 If anyone ever asks me who the hardest working rapper in Baltimore is, I'm probably gonna have to tell them Tyree Colion. I don't know if it's because he was locked up for 11 years and he's making up for lost time, but for whatever reason, dude's work ethic is ridiculous. Last fall, he dropped the double CD mixtape The Problem And The Solution, along with a DVD, and now, less than 6 months later, he's back with a triple CD mixtape. Man, dude must live in a vocal booth. When I first heard about it, I figured maybe there'd be a lot of guests filling up the discs, but it's pretty much all Tyree, only a dozen or so tracks with features, out of 60. And he doesn't even do a lot of freestyles over industry beats, it's mostly original songs, and man, any one of these discs is better than a lot of people's whole CDs. I can't say I like every song on here, there's some ideas that aren't pulled off successfully, like the rude bwoy flow on "Blame It On," but for the most part it's real consistent. Tyree kinda reminds me of Pac, in that he doesn't have the craziest flow, but he's got so much to say, and you have to keep listening to see what he's gonna say next.

Apparently the release party ended up not happening, but later that week, Bilal Bahar of Crushforce called me up and got me a copy of the CDs before the artwork was even done. Bilal is a good dude that I've met at a few shows, and he's the host of the mixtape, and also works on WMAR's Baltimore Saturday Night with Steve Rouse, which Tyree appeared on a few weeks ago. Bilal mentioned something to me about Tyree getting arrested, and the other night at Style Warz, the runner-up was SL Danga from the Young Hustlers, who kept saying "Free Colion, he'll be home soon." So I guess Tyree is having some problems right now, hopefully that will work out alright for him. I don't know if the mixtape has been officially released yet or if they're holding it up because of that, but if you get a chance to get a copy, cop it. Free Colion!

Rare Ent.'s MySpace page has a few songs up for download, including my favorites "Blocka Blocka" and "My Projects" (both of which were produced by Darkroom Productions). Here's some more, though, one track from each disc:

Tyree Colion - "C.O.L.I.O.N." (mp3)
Good way to start off the tape, explaining his name and his backstory over a fly beat and a new flip on an old chorus.

Tyree Colion - "Huh Man" Remix (mp3)
The original "Huh Man" was over the beat from Cam'ron's "Get Em Girls," and while Tyree always played it in his live sets, I don't know if any Baltimore MC can leave their imprint on that beat more than Verb's "Get Em Verb." And that might be why Tyree went ahead and re-did the song with a new beat, produced by Skarr Akbar, and it's a banger. I remember the first time I heard the new version was when Tyree performed it at the Little Clayway release party, and I couldn't wait to get a copy of it.

Tyree Colion - "Time After Time" (mp3)
Usually I'm not real into Tyree's laid back ballad-type songs, but he did some cool shit with this Cyndi Lauper sample, nice doubletime flow, some political lyrics.

# posted by Al : 1:55 PM
Comments:
What's good Al, can Darkroom get a nod for our production on "My Projects" and "Blocka" and also there will be remixes to both of those songs on Hamsterdam 2. You know we must plug at any given oppurtunity. Thanks

Oh Shit! and I forgot "My Projects" will be heard on "The Wire" this Fall....

FUCK DARKROOM PRODUCTIONS. THEY BE GIVING ARTISTS THE SAME BEATS TO RP OVER AND BE CHARGING. THEY ARE SOME SNAKES.

Them dudes at darkroom productions are some snakes. They have been getting over on alot of local artists. I guess they forgot Baltimore is a small place. You can't sell the same beat to three or four people and think your going to get away with it. The streets are talking and listening. Yawl better get yawl shit together.

If you get a beat from Darkroom Productions make sure you have some type of written agreement with them. Other wise your screwed. These dudes are fucking people over on a daily. I happen to be listening to some music yesterday from three different artists and all three artists have the same beat. Guess who did the production???? Darkroom Productions.

"Cut Your grass Everyday, So You Can See The Snakes" , the music business is just that, a business. fucked up huh!

Listen hater, don't try to defame our name by spreading lies over the internet. Why don't you reveal your name, so people can see if you are valid, instead of doing the bitch move and hiding behind the anonymous tag. Darkroom has never sold the same beat to two different artists, NEVER!!! and to the bitch who posted that shit, if you are hating Darkroom now, you might as well go ahead and KILL YOURSELF, because your momma gonna have a Darkroom tatoo on her ass real soon. CLOWN!!!

BRING YOUR BITCH ASS BACK TO DC AND YOU'LL KNOW WHO THE FUCK I AM WHORE. STOP HIDING OUT IN BALTIMORE.

I'm from DC you are making us look like hating ass bamas. With that mentality, know one will blow!

Wow. Well first off, I just want to apologize to my man Tyree Colion. This post is about him and his crack of a mixtape "Tyree Colion presents Hustle Hard Blvd". Please continue to support the God. Colly you know it's all love my nig, holla at cha man.

I would hate for Tyree to come home and see that n*ggas is talking reckless on a post about his project about some producers. My partner just wanted to make known the fact that the songs Al was speaking of were produced by Darkroom. But someone took it upon themselves to try to use that as a platform for some bullsh*t. Basically it's like this homie, if you copped a beat from Darkroom, and heard it on another project, please call me immediately at 443-226-3329. Everyone that buys a Darkroom beat gets a receipt, please call me with your receipt number and let me know the project you heard the beat on. It's really that simple.

You are obviously an aspiring rapper and don't quite know how the business works yet. But to break it down for you, all producers (not just darkroom) solicite beats to mass amounts of artists. 9 times out of 10, they are the same beats on each cd. If you hear a beat and think it would be hot on your project, you call the producer, discuss the price, pay for the beat, get the beat on a tracked out audio file, and the beat is now yours. Simple business. But if you get your hands on a producer's beat and use it without paying for it, than you are taking a serious risk. Because if the beat is crack, and you dragged your feet on paying for it, then most likely someone else stepped up and copped the beat before you. That's a part of Hip Hop. Unless you have been under a rock for the past 10 years, Hip Hop is now a business homie. And no good business man lets an opportunity to make his product better pass him by. This is something you may want to remember in the future. So I'm not here on some hateful sh*t, I just want people to know that Darkroom is a business, and that's how we operate. So again, if you PAID for a Darkroom beat, and someone else has it on their project, well yo, you need to call me ASAP so we can get it straightend out. Because we have NEVER done any sh*t like that. If you don't like Darkroom, just say you don't like Darkroom and keep it moving. Talking big on the internet is for females and homos, and I am neither. So on some business sh*t, call me to get your money back if you were done greasy. Other than that, keep our name out your mouth. Again, Tyree, I apologize for this clown, the mixtape is crack, see you when you get home. One. Juan Donovan

Bullshit to the highest power. Yawl some snake ass bitches. Dc knows it and now it's time for Baltimore to find out.

Get off of Tyree Nuts Bitch.

Can I keep real with homie? Are you just saying that to be hateful or it's just a fact. I since I been on these local internet board I notice off hand a bunch crab ass haters who's madd that their lives ain't poppin so they stread hate on the board instead of addressing it in person to who they got a problem with. To me it's so female like to bitch about somebody's success and it's clown like too. Are you really from DC I just want to know because you're making my town look like backwards clown just asking homie?

This comment has been removed by a blog administrator.

I read this page frequently, but I never posted until now.

Be careful what you write on the internet.

Libel and slander are two forms of defamation (or defamation of character), the tort of publishing (to a third party) a false statement that negatively affects someone's reputation. Libel is defamation that can be seen, such as in writing, printing, effigy, or a movie. Slander is any defamation that is spoken and heard.

Do not rely upon an "anonymous" post either. A plaintiff may sue you and the website owner, and obtain your true identity through legal means.

If anybody needs more information on this or any other aspect of Entertainment Law, contact my office at (410) 545-0470 or www.EntertainmentLawyersOnCall.com

I still think it's foul for someone to post lame rumors on a site- Kenneth!

yep, i no what you mean an the dude from dc is making dc look bad. like he is making it seem like all of us down here dislike bmore rappers.

but got look on the mixtape the shit is hot. i hope tyree is alright. an he gets this shit sloved out. good job tyree

Stay up Tyree I hope everythings stright so you can do that Hustlar Blvd movement.- Kenneth