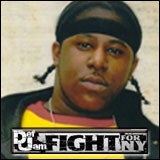 Despite the fact that Def Jam has yet to give Baltimore's Comp a release date or a significant promotional push, they have made him a character in their new video game, Def Jam: Fight For NY. Weird.

Also, this is Comp's official website, and this is the website of the clique he used to run with.

they got Fam Lay in there and he's not even on the label anymore.

is the game any good?

I dunno, I haven't played it. the previews I've seen aren't that promising visually, they made most of the rappers a lot more muscular than they are in real life and it looks kind of silly. there are a LOT of playable characters on this one that aren't from NY or even on Def Jam.

and haha yeah, Pockets is Comp's dad! that's weird. I forgot to mention, he also has a song called "Comp" on the FFNY sdtk.