I interviewed Teddy Douglas and DJ Exclaime on the Baltimore City Paper's Noise blog, about their Respekt party this Saturday at the Paradox.

I wrote a post on the City Paper Noise blog in which I counted down the 10 Baltimore musical acts with the most followers on Twitter. 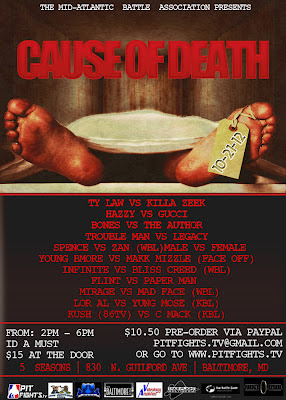 This week's Baltimore City Paper features the latest installment of my local hip-hop column Rap Sheet, which includes news about Shaka Pitts and The Mid-Atlantic Battle Association's next rap battle tournament at the 5 Seasons, and about the forthcoming Von Vargas album World Famous Lexington Market. I also included a list of the most followed Baltimore rappers on Twitter.

Also in this week's paper, The Short List as usual, and an interview with Travis Morrison of The Dismemberment Plan, one of my favorite bands, who are playing Baltimore this weekend. A longer version of the interview is also available on the Noise blog.