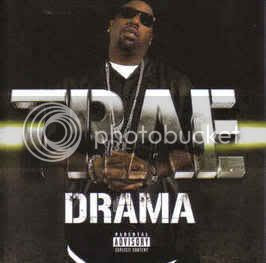 the new underground from trae from s.l.a.b./abn/guerilla maab, that scowling, stern rap that doesn't come from anywhere except houston, from the imperious young men in secret service sunglasses and regal black. not even requiring dope game trappings, never giving you a price quote on a brick, just letting you know what they do now, right now. trae talks about rules, his code of conduct, staying principled when anyone can come at him sideways. these are cold and grim lectures. he takes it from abstract to concrete and to the focus of this whole thing, handling his business and exposing these pussy niggas from austin. the silvaback gorillas (yeah, not the ones from south jamaica queens that are beefing with 50 [he's still talking about bang em smurf getting fucked in jail][and remember that trae's partner z-ro still has plex with 50], as the lil interlude interview with domination from the real silverback gorillas explains ["i don't know who these fuckin girlymouth niggas is thinkin they the silverback gorillas"]) don't know the fucking rules, "need your motherfuckin stripes took, nigga, need to be kicked out the hood, nigga!" he explains the story, how one of them tried to get on his record and dissed him when he got turned down ("it ain't even bout the money, i'll tell you how i'ma beat ya / if you real why your soldier was beggin me for a feature?"), glossing over getting jumped at the mall, killing the nascent austin/houston beef that s.b.g. was fomenting. and lots of those spoken word disses that houston rappers love, including phone interviews with various marginal players in the beef. flowing over beats from the game, flip, eminem, luda. features from yung redd, dallas, billy cook. previews of z-ro's album (just a snippet of the mule) and the upcoming abn (sorry, it's: assholes by nature) album (way too short snippet of a track with bun b and paul wall). second disc, slowed, s.l.a.b.'d.