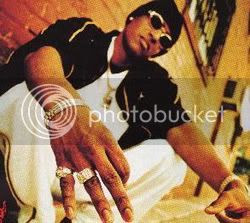 c-murder - the truest shit i ever said

"sittin here in the belly of the beast ... trapped for a crime, behind bars ... i'm locked up ... ain't no love ... won't let me out ... think they testin me."
prison raps mumbled into the greysuited chest of his attorney. with a handheld black radioshack mini recorder on the round table between them. softly intoning the carefully handwritten lines off legal pad, pausing and crooning the hook, reading faded yellowed tattoos off his inner forearms. rapping like a practice, reading under his breath. the only decorations are the little upturned syllables: "mama how you figure i'm a nigga destined for paiiii-uhnn." that bathroom reverberation on the voice still. voice still sinking down to an almost whisper, vocal cords barely vibrating.
but, that confined feeling. grimy, beautiful, loud music rolling around him and his voice never being able to rise up to move with it, get up, diverge, strapped down to that black ink and yellow paper. everything in the same slow, desperate rhythm that sounds like defeat, beatendownness-- but the whole thing a tribute to fuck this and let's get it on and keep getting money and creating real, important things in the face of whatever grim bullshit.
drifting thru the grey hallways, out a window, down the interstate to wander familiar streets and neighborhoods, jogging his memory. remembering a story about a thorough kid, or a girl, or himself. but talking nonspecific, mostly. he talks about a family without names and his city with the neighborhoods mostly missing (until fiend and bg and soulja slim call them out). and music and what he did before music. and rules you should follow. and i think maybe he's talking less personally reckless but with guns still partnered with extended clips and fiends still losing teeth and bodies still rotting in the swamp, etc.
sometimes he's in prison. rapping to akon in place of styles, "writin chickens across the border / what's your number, i'm hurtin, let me get a money order / i owe my lawyer some change now he might drop the case / now if my playa don't shake it i might hop the gate / starin at these walls i'm fallin, they set my court date back / payback when i shake back and cop a maybach / and i'm meetin beans and lustin on king magazine / it seems i'm home free but it was just a dream / i'm locked up."
listen: calling his girl collect to set up the only prisonphone rap on did u hold it down ft. bass heavy. "this c, baby! press zero, ya heard me...." i'm feeling this more than the dirty future classics with slim and geezy. it's that constrained voice and slick, beautiful beat, talking real talk to the woman that's stood by him thru everything.
listen: rapping about staying haunted by the streets and hunted by police, putting money on his head and taking pictures of wherever he rests his head. "cut your speakers up and check out that gutter music" on mama how you figure ft. ms peaches. talking in those extended, hard to transcribe bars: "papa was a rollin stone, papa wasn't home / me, moms, and the kids was stuck at home / i said fuck that, i'ma get paid / i'ma get me and take to the streets and work my way to a key / cause i'm a hustler, jacker of the jackers / make moves with thugs, make moves when niggas show me love / i'm from new orleans, yeah we be ballin / listen to the lyrics boy, the streets be callin / i was on the set tryna set me and wet me up / but these days i beefs like i don't give a fuck / we can all get buck, that's my mentality / i bring you back to reality..."

Comments:
I know you don't give a shit what I think because I'm irrelevent or whatever but that was really great man. Nice work.

Nice. We spoke a bit about "Mama How You Figure"" in my interview but it didn't make the cut, maybe i'll post the audio tonight.