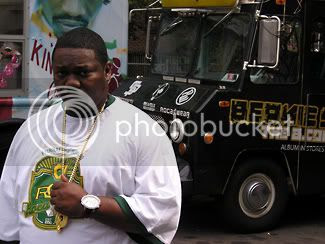 beanie sigel ft. bun b - purple rain -- downtuned standard over-the-top triumphant roc beat, drums punching you into the chorus (BOM! BOM! BOM! BOM!), but, yo, those echoing electricelastic guitar strums straight off 400 degreez! sorta redoing the track with flip off the green lantern mixtape. (flip was talking about guns instead of cough syrup again, i think). bridging the gap here.

beanie: middle of the night in dead of philadelphia winter, rolling in long long 04 esv escalade, grille pushing through manhole/exhaust clouds, flying through red lights. pills arranged in some sorta tacklebox briefcase, still in the clear or amber bottles, labels pristine: smoked salmon cream cheese colored oval percocets, thick white chalky tylenol 4s, tiny white dilaudid, tramadol, 100mg oramorphs and kadian time releases, benzos from clonazepam to lorazepam, strips of fent patches, and arranged in the bottom, a collection of brown flasks of prometh/codeine, or maybe even one of the big brown two liter jugs of codeine from the pharmacy. serious, though. serious. picturing that same grim expression as in that picture there. drinking it on top of expensive liquor and collapsing down into yourself, panicked drowning feelings and paranoia about respiratory paralysis and the world receding and everything scaring the shit out of you and guns all over the place and trying to get in from the cold. -- twisting up fucking up his words with iz iz iz iz "promethazine with codeine, that's my twizzis, might lean you to the left or make you izzitch" and shouting out "my man lil flip, big moe, project pat and the whole three six," and telling cautionary tales --

but be careful it ain't your ordinary liquid
the first time you sip it, you might get addicted
matter fact, i know you gon get addicted
cause it's so sweet, like licorice
plus, it's good for your sickness
i used used to watch my uncle sip it
goin through his act in my grandmother kitchen
head in his lap, grandma bitchin
pocketful of scratch, plus scratchin and itchin

bun, because beans know about them texas boys, who keep a litre in the cup and a heater in the tuck. but thousands of miles away, sunshiney afternoon with beautiful cars circled, leaning out of beautiful buicks parked in driveways, watching blank flipdowns, big white styrofoam cups from highschool dances, filled with orange drink or punch with a plastic ladle-- but here, filled with big red from waco or sprite, and cloudy tussin ac out of soda bottles or ugly brown methadone bottle-looking eights from across the border. brainstem tickled by that amazing amazing amazing ecstasy: afternoon nap feeling, sunshine warming your face and turning everything dark pink through your eyelids. and. everything is right in the world. your brain turned down to slow dumb throb. -- screw schooling him on drank and r.i.p. to fat pat, big steve, big mello, robert davis, jr. --

way back when in 94 when screw still had his gate up
he called me over to his house and he poured me an eight up
i asked him what it was, he said "bun get your weight up
"this is lean, them white folks call it promethazine
"shit, but we gon call it drank dawg cause that's what we be doin to it
"now take this big red and pour about a two into it"
i said, twos and eights, what the fuck is you trippin on?
he said, "man that's the ounces of cough syrup that you sippin on"
so shit, i poured it, i sipped it, then i sipped some more
i fired up a green monster and i hit that hoe,
started relaxin, shit, and to my surprise i was noddin off lookin at the back of my eyes
they tried to wake me up but shit i just kept yawnin
i fell out in my chair, woke up there the next mornin
god bless my nigga cause since then i been spun
on my white muddy cup of texas tea

Comments:
Found a lot of useful info on your site about smoked salmon - thank you. Haven't finished reading it yet but have bookmarked it so I don't lose it. I've just started a smoked salmon blog myself if you'd like to stop by