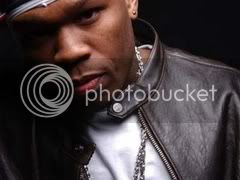 50 cent - piggy bank -- clickety clank clickety clank clickety clank the money goes into my piggy bank. huge new york beat with booming drums and scraping strings, choirs in the background. and 50 coming with just-- angry. dark. not swaggering on it, even the bentley lines flat and angry. just totally grim. i don't know. listen to how to rob after it for contrast. or even, i don't know, back down.
but it's been a few weeks of boring political beef, careful movements and then even more careful backpedalling, picturing analysts with graphs, powerpoint presentations, statistics. it's nice to hear someone explaining their situation and naming names.
and now everybody can pick up the red phone, give the launch codes to their radio djs, start the buzz for the songs they've already had done for weeks now. jada. joe. maybe ja, if he's still interested. maybe nas ("kelis said her milkshake bring all the boys to the yard / then nas went and tattooed the bitch on his arm"), but hopefully not.